In July of 2020, eRacr conducted the largest independent iRacing event in history – The Firecracker 400. 344 competitors competed over three weeks for a prize pool of $12,500 in front of a live audience of over 300,000 viewers.

Our next event is taking lessons learned from the Firecracker to increase the size and speed. We are calling it the Carnomaly 500. With 900HP stock cars unrestricted at iRacing’s virtual Daytona International Speedway, drivers will race at speeds over 230 MPH, making this the fastest Daytona stock car event ever!

The event structure will allow nearly 500 competitors a chance at a $15,000 prize pool through a tournament-based design spread over five nights of racing from February 17th to March 3rd. Every competitor will race on a live broadcast as each portion will be professionally broadcasted across live-streaming platforms.

The entire event broadcast will feature eRacr’s ground-breaking new interactive technology giving the viewers an unprecedented involvement in the event.

It takes about 5 minutes to read this entire document. However, the TL;DR is immediately below:

What is the entry?

What is the format?

What is the purse?

How do I earn prize money?

Will I race on a broadcast even if I don’t make the main event?

What is the Event Format?

Competitors will be required to pay an entry fee to enter the event. We will be prepared to support 496 entries into the event by splitting the event into 5 stages. The first stage of the event will be a series of single event heat race servers. These preliminary races will narrow the field down to 88 competitors. For all competitors, we will run 8 races in two nights, transferring the top 11 finishers out of each race to advance to the “Qualifying Round” to be held the following week.

Each race will be broadcast live, giving all competitors an opportunity to be highlighted on a race broadcast

The next week, those top 88 competitors who advanced through the Prelim races will then attempt to qualify through a single-car one lap qualifying format. There will be a qualifying draw to determine the qualifying order, and each competitor will get one attempt to run one timed lap. At the conclusion of qualifying, the top two (2) times will be locked into the front row of the Carnomaly 500. Those two drivers are safely in the main event field, but will not compete in the next stage of events.

The 43rd starting position in the Carnomaly 500 will be reserved for a competitor of eRacr’s choice.

The 43 drivers who did not advance through the Battle 150s to the Carnomaly 500 will all be awarded prize money equal to their entry fee.

*eRacr will use admin cautions for the Consolation and Feature Races. Heat Races will not have cautions

How to join the races.

Leagues will be created for each prelim race. You must accept the league invite to get into your race

Another League will be set up for the 88 eligible for qualifying.

How will the event be broadcast?

This broadcast will incorporate bespoke graphics and a brand new graphics system developed in-house by eRacr’s very own. In addition, we will be unveiling a groundbreaking Twitch extension developed in-house for viewer interactivity. This is a “fantasy” game that viewers can play as the event unfolds – eRacr Predictor. The viewers will be prompted on the broadcast screen to predict their Top-5 finishers, qualifying speeds and pit stops with a live point system to be eligible to win prizes at the end of the event.

There will be five days of live broadcast over the three-week span of the event. Starting with the preliminary qualifying races which will be broadcast LIVE, with interactions from the competitors and viewers.

The single-car qualifying stage will be broadcast LIVE in its entirety as well with Landon Cassill and Parker Kligerman involved throughout the broadcast. Culminating with the main event broadcast that will incorporate many never-before-seen features in an iRacing broadcast. 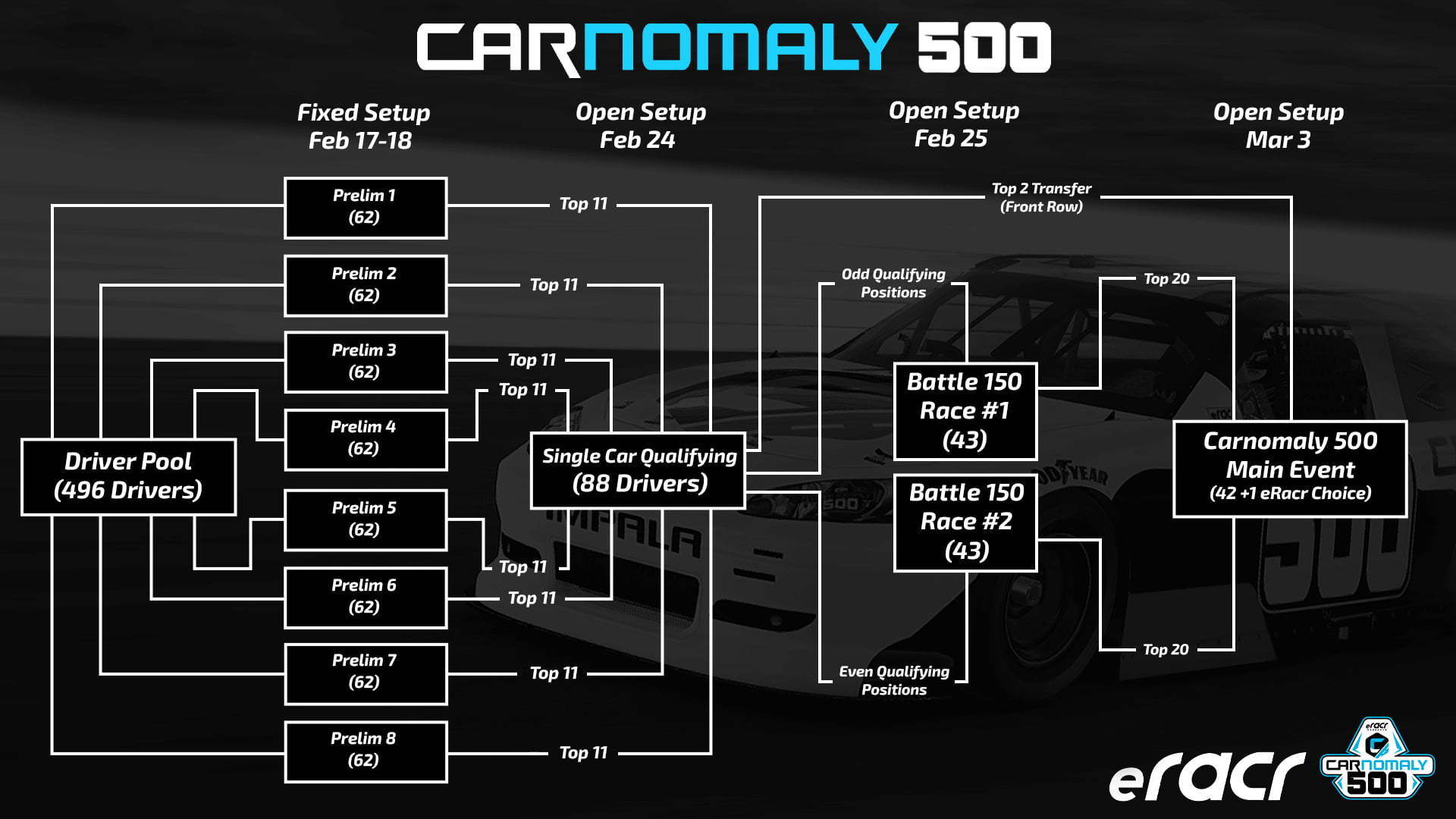 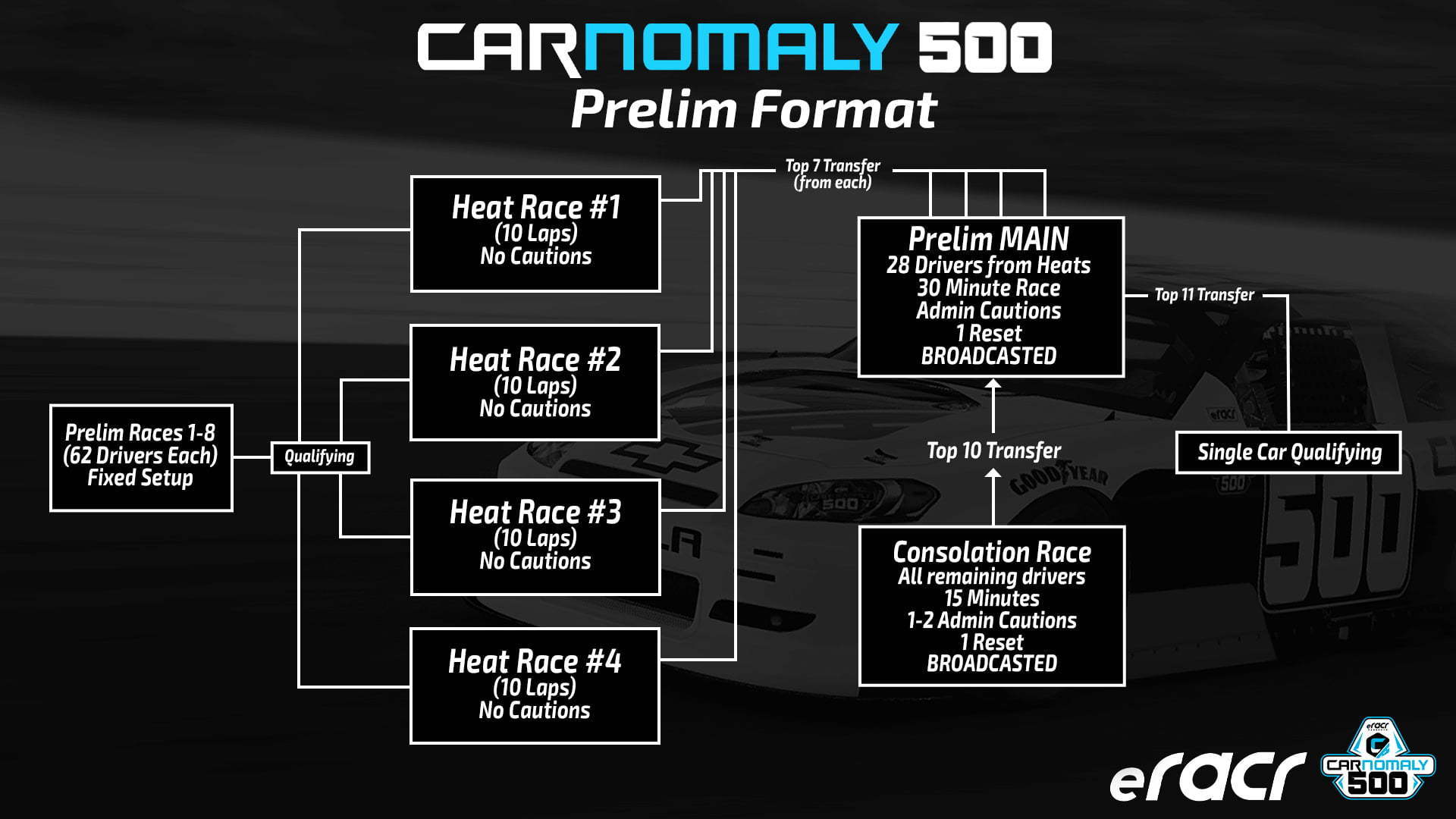