Buying blinds online at SelectBlinds.com is easy, convenient, and saves you time and money. No high-pressure sales. No time-consuming appointments. No waiting for weeks or months for your custom blinds and shades. Just friendly, knowledgeable window design experts dedicated to helping you select the right wood blinds, faux wood blinds, shutters, cellular shades, bamboo/woven woods, whatever window covering you want. With hundreds of styles, fabrics, patterns and colors to choose from, you’ll wish you had more windows to decorate!

You can even try before you buy online! We’ll send you up to 15 free samples at a time. And when you’re ready to buy your custom-made blinds and shades, we deliver them to you for free, too! Whether you live here with us in Arizona, or you’re in Texas, Chicago, New York, Los Angeles, or Washington, we deliver for free anywhere in the entire contiguous United States. Some restrictions apply. 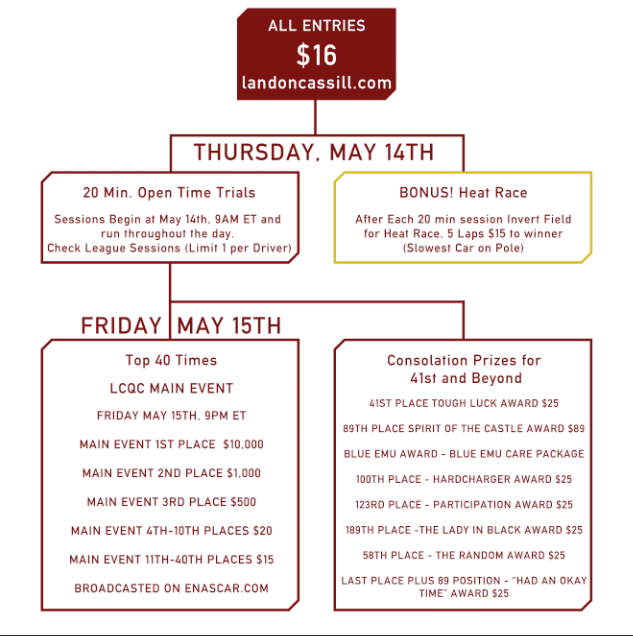 What is the Landon Cassill Qualifying Challenge?

The Landon Cassill Qualifying Challenge is an event designed to test the best of the best sim racers around the world to compete under extreme pressure. Landon originally started this challenge in 2010, to mimic the pressure he dealt with on a weekly basis when he attempted to make the NASCAR Cup Series field each week.

How many racers will compete?

Over 200 competitors competed for 40 positions in 19 group time trial sessions. The top 40 times then run a single lap, in an attempt to set the fastest lap of the entire 40 car field.

What does the winner receive?

Other consolation prizes are distributed throughout 41st and the last place driver.